The Challenge
As the newest, most technologically advanced convention facility in Southern California, the Ontario Convention Center serves as a catalyst to bring conventions and tourism to the City of Ontario, part of one of the fastest growing metropolitan areas in the U.S. Due to the economic recession, California energy crisis and the aftermath of 9/11, the convention and tourism business has become increasingly competitive. Although Southern California is a preferred destination for meetings, research showed that many meeting planners were either unaware of Ontario, California, or confused the city with Ontario, Canada.

The Approach
After a review of historical revenues and current bookings for the Convention Center, Wilkin Guge Marketing targeted association meeting planers as the strongest potential customers. The agency then conducted a primary research study of over 3,000 association meeting planners in the Western United States to determine booking patterns, planning resources, destination and facility selection factors, and their top three concerns when planning a meeting or convention. Based upon this research, the agency developed key messages to reinforce Ontario’s affordability, safety and convenience as a Southern California destination. Additi 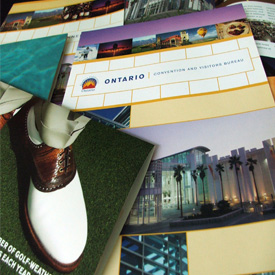 onally, the agency crafted a strategic marketing campaign emphasizing direct marketing, trade publication advertising and editorial, website redesign and search engine listings, collateral development, and an incentive program for planners who include Ontario in their RFPs (Requests for Proposal). All awareness vehicles were developed with tracking mechanisms, including a series of 800 numbers and website software, to measure results and allow continual adjustment of the campaign for effectiveness.

The Results
At the end of the marketing campaign’s first year, qualified leads had more than doubled (116%) with resulting sales generating an economic impact benefit of $25.6 million, a 36% increase over the previous year. In the second year, Ontario enjoyed an economic impact of $34.1 million with the sales team converting one out of every three leads and securing multi-year contracts.